Amazon Prime Video’s original series The Grand Tour is hitting the road and ready to make a pit stop near you! Get on your mark because starting this fall, The Grand Tour will crisscross the United States making stops along the way, bringing car loads of fun along for the ride. This nationwide journey will be comprised of drive-in screening experiences, cars & coffee breaks, and a culminating party at the famed Petersen Automotive Museum in Los Angeles, Calif. The Grand Tour is a hilarious new global adventure from the Amazon Originals slate – something definitely worth buckling up for.

The Grand Tour will bring their own take on the classic drive-in movie theatre experience in six territories (dates and locations listed below), where fans young and old will be thrilled by a double-feature screening of a classic car film and an episode from the hit series. A must-see for families, guests will be welcomed by a custom built-out marquee sign (perfect for taking photos!), gifted branded blankets, air fresheners, and snacks from the concession stand as they enter this immersive drive-in experience. 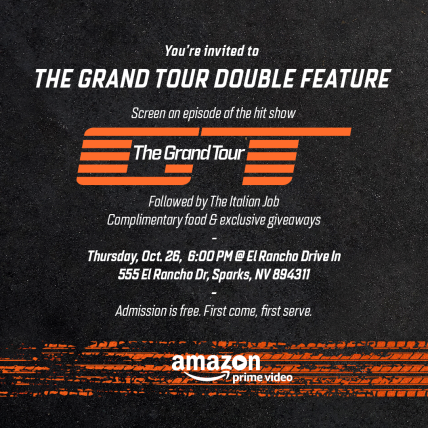 The Sampling Tour will round off with a special party,  open to consumers, families, and auto fans alike at the Petersen Automotive Museum in Los Angeles on November 12. Through a partnership with the museum’s “cruise-in” group, attendees will enjoy a specialty car show atop the floor of the venue. The Grand Tour Fans will be given the ultimate VIP experience with a custom step-and-repeat photo moment as they enter the venue, and a gifted The Grand Tour Tool Kit, which they can have custom engraved on-site. All guests will be granted free admission to the museum and The Grand Tour party, where they will learn about the automobile industry and screen episodes of The Grand Tour.

Season two of the record-breaking The Grand Tour will see presenters Jeremy Clarkson, Richard Hammond and James May embarking on their most extensive Grand Tour ever, traveling through more locations than before and attempting to avoid any further mishaps and injury along the way. The trio will spend over 100 days across five continents, racking up more passport stamps from Croatia, Mozambique, Dubai, Spain, Switzerland, Colorado, New York and many more exotic locations around the world.