Posted on September 10, 2017 by chelseamommy

Chelsea and I had a great time Today at Brick Fest Live. We really enjoyed being able to go to each different section and create different buildings or scenery. I feel that Chelsea really enjoyed playing with the medium sized legos known as Duplos. They had several sets with different letters and numbers on them. So they were very educational for her.  It was amazing seeing the different displays. She really thought the Woody display was real at first and didn’t want to take a picture with him. There were displays of figures and buildings that were built by professional and they just looked amazing.

She also enjoyed watching the Derby races even though she didn’t want to make her own car. She liked seeing who was winning and which car looked the best. I know that she is already thinking about which set of legos she wants to buy or get later on.

Brick Fest Derby: Build and race your custom built LEGO derby car down one of our 35-foot long timed tracks!

Inspiration Stations: Add to existing LEGO cities and make them your own by building custom creations. 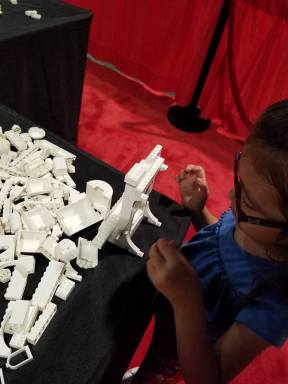 Mini Golf: A miniature golf course built to inspire! Take your game to the next level on the Brick-Links.

Brick Fest Theater Trivia & Entertainment: Participate in LEGO trivia all while taking a break from what will be an overwhelming amount of awesome!

Mosaics: Using a colorful variety of LEGO bricks, build a piece of art to proudly display for other attendees.

Shopping: Find new, vintage, rare, and custom LEGO sets and merchandise from one of the many merchants in attendance.

Chelsea and I definitely had a lot of fun creating different buildings and structures. It was great to see her imagination flowing. She really enjoyed playing with the legos that were meant to build large towers. We also loved the section that had neon legos that when a room with black lights they would glow. It just looked amazing. I was just in awe. I know that Chelsea was too. She really enjoyed going to each attraction and trying them out. The only sections we didn’t really try out were the video games or the mini golf.