Andrea Bocelli has almost always been one of my favorite music artists. I feel that his music is always soothing to hear and so happy to have the opportunity to listen to his new album. There are so many songs that I would consider as new favorites for me. I love the duets that are included in this new album. There is a duet with Ariana Grande, & Nicole Scherzinger. These songs are very soothing and its great hearing so many of the theme songs from very epic movies. So many songs from some of my favorite films. I love that they were remade by a legendary singer! His music has always been in my playlists. 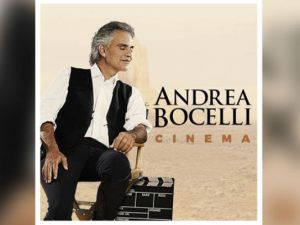 Cinema features a collection of movie songs etched in the culture and hearts of several generations including epic theme songs featured in films such as “Doctor Zhivago”, “Love Story”, “The Godfather”, “Life is Beautiful”, “Gladiator”, “The Postman”, “Breakfast at Tiffany’s” and many more, as well as popular songs from stage musicals, immortalised by their film versions, such as “West Side Story” and “Evita.”

Bocelli will offer fans a once-in-a-lifetime experience on September 18 and perform new material featured on Cinema at the Dolby Theatre in Hollywood, CA. The intimate performance will be taped and produced for television by PBS as part of the Great Performances. The TV special, “Andrea Bocelli: Cinema,” will make its initial airing as the final presentation of PBS’ “Fall Arts Festival,” and is set to air nationwide across hundreds of PBS stations on November 27. The concert event will be personally arranged for Bocelli’s extraordinary voice by musical director, David Foster.  Bocelli’s prior PBS specials have consistently been some of the networks’ highest watched performances, and include some of his biggest events to date, such as “Concerto: One Night in Central Park” and “Love in Portofino.” 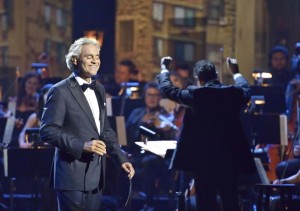 *I-Tunes: http://bit.ly/BocelliCINEMA
*Amazon: http://bit.ly/CINEMABocelli
* Official Andrea Bocelli website: http://www.andreabocelli.com
* Twitter –   https://twitter.com/andreabocelli
* Facebook: https://www.facebook.com/andreabocelli
* YouTube : https://www.youtube.com/user/andreabocelli
*Instagram: https://instagram.com/andreabocelliofficial/
Disclosure: I participated in the Andrea Bocelli “Cinema” album review program as a member of One2One Network. I was provided an album to review but all opinions are my own. I would never recommend a product that I have not tried myself nor used, every product on my blog has my full support and backing unless otherwise stated or noted. All opinions displayed here are my own. If you would like a review done contact Nicholle @ nscalacorona(a)gmail(dot)com